← back to
False Idols
Get fresh music recommendations delivered to your inbox every Friday.
We've updated our Terms of Use. You can review the changes here. 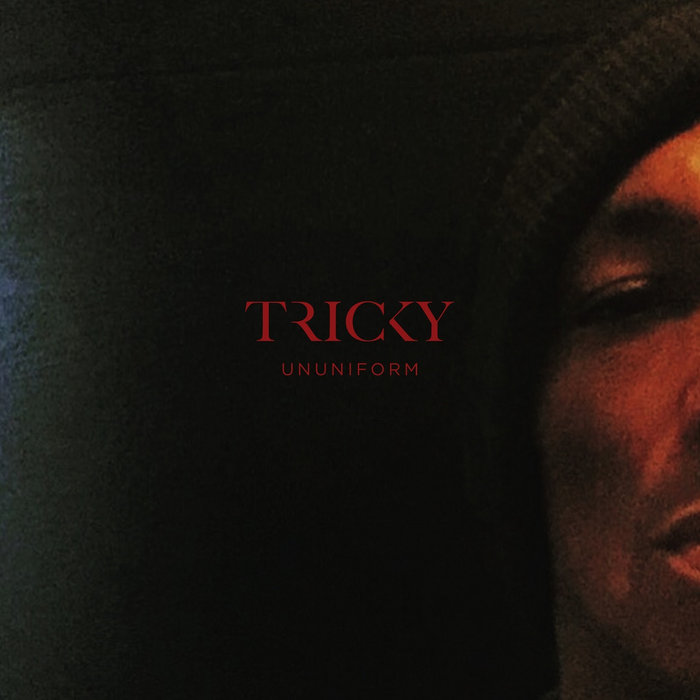 rikm I've always been drawn to the unsettling nature of Tricky's work, it's languid and claustrophobic feel, a vaguely uneasy sense that sets him aside from other artists and adds an actively engaging element to his music.

I like that feeling, and on "Ununiform" Tricky continues to explore those feelings, those moods, those senses, and I find myself still drawn to his explorations, returning and returning, finding new details, new moods, new feelings with every listen.

kabukione If I have to name one and only one favourite artist, this guy would be the one.

vinyladdict71 all of em, awesome album if i do say so myself 😀 Favorite track: Blood Of My Blood (feat. Scriptonite and Tati).
more...

Tricky returns with his 13th album, ununiform, out in September on his own label False Idols via !K7 Music. It’s a delicate, storming, intricate album that sees Tricky take perhaps his most radical step yet – a journey into happiness and contentment. It’s a record that shows the legendary British producer confront his legacy, history, family – even death itself. And in all of this, he finds the strangest, least familiar thing – peace.

This is the first album-proper made since Tricky moved to Berlin, three years ago. While many people move to the clubbing capital of Europe to party, this was a clean break, in every sense of the word. “I like it here because I don't know anybody. I eat good food, I go for walks, I've got a bike. I’m trying to look after myself. I don’t drink here. Some people call it boring, but I wake at 9am and I'm asleep by 11 o’clock at night. I’m looking after myself.”

Though most of ununiform was made in his adopted capital, four tracks were recorded in a city further east, the capital of Russia. “Moscow is my favourite city in the world,” he says. “I didn’t want to spend Christmas at home, so in December 2016 I spent three weeks there recording and eating Russian food.” The four tracks made in the dead of winter in Moscow feature collaborations with local rappers and producers. “I've been listening to Russian rap for 20 years. I love those accents, so I've always wanted a Russian rapper on my album.”

The rappers and producers he worked with are among the most famous and critically acclaimed in Russia. Among them is Scriptonite, who MCs on the knotty ‘Blood Of My Blood’ and ‘Same As It Ever Was’. Vasiliy Vakulenko, one of the country’s most popular rappers, made the beat for graceful, gaseous single ‘The Only Way’. Rapper Smoky Mo appears on digital rap workout ‘Bang Boogie’, a tune produced by Gazgolder, the owner of one of Russia’s best and biggest rap labels. All this without Tricky speaking Russian. “I don't need to understand what they’re rapping. I could just feel it. People live like everyday is their last day, and I like that.”

Though the album is more settled and at peace with life than any other that Tricky has recorded, it’s also one shot through with references to the end of life, from the raving, synth-led ‘Dark Days’ to the single ‘When We Die.’ “Word to the wise: I don't want to die young,” Tricky explains. “But my first memory was seeing my mother dead in her coffin in my family house. I'd go in, stand on the chair and look at her. So I’m saying to that kid on the chair, ‘it's going to be OK. You're going to tour the world, you're going to make music, and the good life is going to come in.’ If you don't accept death, you don't really accept life.”

Tricky also credits much of the freedom of ununiform to something more grounded: “This album now is the first album I've made (in years) which isn’t going to pay off some kind of debt. So it's more relaxed!” Referring to his previous albums, False Idols, Adrian Thaws, and the Skilled Mechanics project, he says “I was doing these records thinking ‘the quicker I do this album, the quicker I pay off the tax people.’ So ununiform has been very chilled out. Now, I own the label, I pay for everything myself. I'm a truly independent artist. Now I do what I want. Freedom is a beautiful thing.”

Interestingly, the effect of this new-found financial freedom, and a newly healthy lifestyle, has led to Tricky turning back to his classic sound – perhaps the final frontier for such an inveterate experimentalist. “I've got nothing to prove now, and I'm comfortable with referencing myself.” Indeed, he’s since described lead single ‘The Only Way’ as “Hell is Round The Corner, Part 2”. This sensation is perhaps a response to a wave of artists referencing Tricky’s ‘90s records and his approach, from The xx to boundary-pushing London rappers Gaika and CASisDEAD, the latter of which Tricky recently collaborated with. “I've got a really wide audience. So I've got nothing to prove. I feel like sometimes it's OK to do it again.”

In this spirit of revisiting the past, ununiform also sees the return of previous collaborators Francsca Belamonte as well as former girlfriends Asia Argento and Martina Topley-Bird. ‘New Stole’ is a fresh take on ‘Stole’, a song from Italian singer Belmonte’s Tricky-produced and False Idols–released 2015 album Anima. Martina was the vocalist on Tricky’s era-defining debut album, Maxinquaye, released one month before their daughter was born, and featured on his follow-up albums Nearly God (1996), Pre-Millennium Tension (1996), and Angels with Dirty Faces (1998). Since this extraordinary streak of albums, their relationship has been less fruitful musically – this is the first time that they’ve worked together on a record since Tricky guested on Martina’s Mercury-nominated solo album Quixotic (2003). Yet Tricky is keen to stress that her vocal on the sumptuous ‘When We Die’ is less of an emotional reunion than it appears at first glance. Tricky stresses that though their musical collaboration elapsed over a decade ago, they’ve been in constant contact through raising their daughter. “This situation happened through actually having the time to do it. I said to Martina ‘it would be great if you were on the album,’ and it happened really naturally, with her sending her vocal in an email. My managers realise it's a big deal and that it would be to listeners, but it’s not to us”. With Asia Argento, the actress Tricky dated for a year in LA, and appears on the delicate, trembling and achingly beautiful ‘Wait For Signal’, it was a similarly relaxed affair: “it was really easy working with her because I knew her well and she'll try anything. If I said to her this song is really unfinished, it's not where I want it to be yet, but try something, she’d go for it. You've really got to be able to take a risk.” Yet Tricky is still eager to discover and collaborate with emerging talent. Enter female vocalists Terra Lopez (part of the group Rituals of Mine) who features on ‘Armor’, Mina Rosa who features on album highlight ‘Running Wild’, and Avalon Lurks who delivers the vocal on the cover of Hole’s 1994 song ‘Doll Parts’.

There’s one final emotional return that took place over the last three years – Tricky’s reconnection with his family’s history in Bristol’s soundsystem culture, and the discovery that his granddad was legendary (and the stupendously named) reggae DJ Tarzan The High Priest. Back in 1965, when the first wave of Afro-Caribbean immigrants were making their home in the port city of Bristol, Tarzan set up one of the city’s first soundsystems – a glorious if under-reported history that was uncovered through Bristol Soundsystem Culture, a landmark exhibition in Tricky’s hometown. “My granddad made a record and in those days it was a big thing. He was a well-known artist before I was born, and changed English music in ways we don’t even know.” Tricky’s tough family life has long been the subject of psychological speculation on the part of critics and fans – his mother killed herself when Tricky was four, and he was raised in a series of foster homes. But this revelation of a lost musical great in the family has transformed Tricky’s life. “I reconnected with my father’s side of the family during the recording of this album, and in a way, the fact that I'm coming from good lineage made me feel good coming into this album. I’m from a line of kings. That feels good.”

At one point, he asks a rhetorical question: “People say this album sounds like ‘Tricky’ … But what does that actually sound like?”. Ununiform, then, is a glorious, beautiful, intensely personal attempt to answer that question.

As a producer and a musician, he is noted for a dark, rich and layered sound and a whispering lyrical style. Culturally, Tricky encourages a togetherness of societies, particularly in his musical ensemble of rock and hip hop, high art and pop culture.

Bandcamp Daily  your guide to the world of Bandcamp

Sampa The Great joins the show to discuss her release, "As Above, So Below".